What do you do when you’re triggered? And when others are triggered too? At trainings and in coaching sessions, I am often asked this question. It seems one of the main reasons people learn NVC: to know how to respond in challenging situations with more choice (by better self-connecting and hearing others), with care and consideration for everyone involved. Given current international events (the violence and human suffering in Gaza) this question is very much on my mind right now: What do we do when both parties are suffering so much that they can’t hear each other—so violence and hurt escalates?  I see this dynamic played out on a large and disturbing scale in Gaza (while also involving geo-political and historical issues), and also in discussions about the issue;  it also gets played out everyday in what would be considered the mundane… at home, work, and on the street. I believe that the personal and political mirror each other… the way we interact intra-personally reflects and manifests what is happening in the world at large. So let’s look at real life situation, where one person is sharing some difficult to hear news with another. While on the “mundane” level, I believe we can learn from this how to create more peace at home—and in the world. Here’s the situation–a brief video. 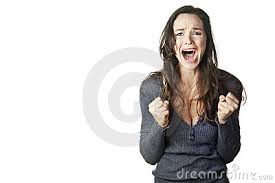 Watching this, my heart goes out to the dad–and both parents. A new baby is coming into the family. They want this baby to be loved and welcomed, including by the other children. Wanting to build excitement and interest for this new arrival, a cake is prepared as a fun way to announce the baby’s gender. Each child is asked to place a “bet”—what’s it gonna be? A boy or a girl? The little boy hopes for a brother. The older sister hopes for a sister. And the current baby in the family wants a baby! When the cake is cut, and pink cake revealed (indicating a girl), the little boy becomes distraught. He begins to cry and scream. “It’s a GIRL!” “I don’t want a girl!”  “I don’t want to eat the cake!” “I don’t want the GIRL cake!” The dad does his best to be empathic. He’s trying to keep it all together… as his wife and daughters listen in. I am sure it’s hard for him to see his son’s disappointment and pain. And I imagine too that it’s hard for him knowing his daughters are hearing again and again, ” I hate girls!” and mom, of course, to hear this too. The sisters, while not saying anything, quickly move to the other side of the table. I’d say everyone in this situation is triggered, to some degree. Just watching it, I got a bit triggered myself! Dad, attempting to be empathic, in fact responds in some of the classic “non-empathic” ways we discuss at NVC trainings. First, he attempts to reassure him: “It’s ok.. it’ll be alright.” He then attempts to offer him companionship, “Hey, you have the same reaction that I did.” (Am not sure how this is helpful for his wife or daughters to hear! And I also get he’s attempting to support his son in this moment.) When his son says, “I don’t want the cake” (in effect– I don’t want this news!), dad does recap back what he says—which I imagine is helpful, so his son knows he’s at least being heard. But dad quickly goes back to reassuring him that “it will be all right.” His sister also attempts to cheer him up by pointing out that the cake (which he has said he does not want!) “has jelly in it.”  The boy continues to cry. None of this reassurance helps. Dad then attempts to talk his son out of it. When his son says again, “I don’t like girls,” dad says, “Oh, come on, you like your sisters!” and then asks each daughter, “Are you happy?” (Each says yes) and then asks the son again, “Are you happy?” This time he screams in response, “No, stop it.” I imagine dad at this point is wanting some relief, calmness and peace. This family video is going all wrong! The little boy, in turn, says, “Stop it!” because being told, in effect, that he should be happy is not helping. The boy, in an effort to integrate the news and move through his own disappointment and grief, then says, “I knew it was going to be a girl when I saw the jelly in the cake!” and the father then tells him, “So you should have been prepared for this disappointment!” I imagine dad is wanting understanding himself at this point (both cognitive and empathic)–and, again, misses where his son is and what he’s feeling and needing. His son, to the very end of the video, even when everyone is asked to say good-by, is still screaming: “I don’t want a girl. I want ZERO girls. It’s always girl, girl, girl all the time!!” Again, even with calmness and best intentions, we see common non-empathic responses here: reassurance, advice, comparison (“me too” dad says), demands (“well, you should have been prepared), and denial.

Perhaps the greatest implicit demand is that it’s not ok with how the boy is feeling— that he should be happy, like the girls are. It’s not surprising to me that the little boy continues to howl. What is the boy needing? I put this question out on Work Collaboratively’s Facebook page , where I first posted this video.  I love some of the guesses posted: that the little boy is longing for understanding, acceptance, and to be heard…and also wanting comfort and support. These needs are triggered in part by the response he’s receiving: repeating himself and raising his voice, he clearly has a need to be heard, and autonomy/respect/space for his own response and feelings.     Another guess (that really resonates with me, speaking to needs at play on a deeper level) is that he’s longing for companionship and inclusion, and imagines a brother would give him that. (Note- one person guessed that he needs a brother! From an NVC point of view, having a brother is a strategy to meet other needs… in this case, I expect, companionship, play, fun, inclusion, connection, and perhaps even balance, since the family includes two girls). I loved too what I would consider a “street” or colloquial empathy guess: “He so desperately wanted a brother to jump in mud puddles with and to be on his side.” This is speaking (via metaphor) to needs for play, fun, connection and support! How would the outcome have been different if the boy had experienced being heard? I am certain there would have been more understanding and connection—in terms of what matters to the boy and the family. There might have also been more fun and joy in the moment, since, once being heard, he probably would more easily move through this feelings and be more present. I also am confident (based on years of practicing NVC, and seeing what happens when people are deeply heard) that new, creative strategies would emerge.  There might have been a discussion (for everyone’s benefit) about gender roles and expectations  (how girls can climb trees too!) and how everyone in the family can be included. Maybe the parents say “girls” when speaking to two of the children–maybe they can make a point more often to say, “kids,” so as to include all of them. I have no idea what the strategies would be; I do have complete confidence that the children, including the boy, would come up with innovative, needs- meeting solutions once everyone was heard.   This really is common sense: How do we solve something before we know what’s going on? Knowing what others are feeling and needing is crucial, basic information in making decisions–and in responding to triggers. The first key step is to practice self-empathy (what am I feeling and needing?). Once self-connected, we can have space to hear others. While a little boy crying over a cake may seem very different from what we face on a global level—from climate change to violence in the Middle East, the more we can as a species listen to each other on a core level, the more, I believe, we will find better solutions and also have greater peace, harmony and connection. I also believe that the more each of us is heard each day and can hear others, even when it seems “mundane,”  the less larger violence in the world will occur. I imagine some of the needs at play in Gaza right now include understanding, support, and balance—and, of course, to be heard.*

*I also want to note that while empathy in itself is profound and transformative, sometimes other measures are necessary to restore and sustain peace (and justice–which is about meeting needs): civil disobedience, protective use of force, and restorative justice (all based on NVC practices), for example. In coming blogs, I will explore these practices.